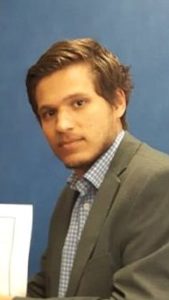 Cultural ambassador of his country to the world

In the Western Ukrainian city of Pavlo Fedykovych’s birth, the border with Slovakia is within walking distance and less that fifty miles from Poland, Hungary, and Romania. Ukraine has been independent from Russia since 1991, but since the days of pro-Russian leadership, Pavlo says, “Ukraine usually tops the rating of the most corrupt countries in the world.” He is emphatically clear that, “as Ukraine has chosen European integration as its path, the decentralization of power is absolutely important in order to win the battle against corruption because local administrators know better what funds they need, how to spend it, and would create a more accountable system of public governance.”

Believing that a career in law could right these wrongs, Pavlo entered Kiev National Taras Shevchenko University (KNU) in 2009, majoring in civil law. Right away he joined the Student Parliament, the Scientific Community, and the choir, remaining dedicated during all of his undergraduate years. He became an Assistant to a judge in a Desniansky District Court and worked an internship in a Kiev law firm in the intellectual property department.

Always seeking a better way of doing things and highly enterprising, Pavlo founded and led Workshop KNU, a student organization in September, 2013, and in which he is still active. “I bring together students and professionals in the spheres of law, diplomacy, and entertainment,” Pavlo says. He tells of inviting the Deputy Head of the Finnish Embassy to speak to his new organization and being somewhat chagrinned that such a small group showed up. Yet he persevered in innovative changes, insisting on better English instruction and enabling students to publish their science research in English for the first time. His second guest speaker, the Ambassador from Spain, drew a crowd of sixty. Pavlo kept working, arranging training sessions, stressing international relations and events.

Fascinated with the American way of living, Pavlo participated in “numerous programs focused on the legal system, human rights protection, the culture of entrepreneurship, and entertainment business.” By the time he hosted an interview with a Hollywood star to an audience of 120 people, Pavlo knew KNU Workshop was a going concern. He organized meetings with the Consul of Germany, the Danish Embassy, and professors from the US and EU. He conducted interviews, live and on SKYPE with celebrities, musicians, partners in top law firms, and business gurus such as the former Apple Chief Evangelist Guy Kawasaki. In cooperation with the Delegation of the EU to Ukraine, the US Embassy, and USAID, he organized “Human Rights Days” and “Transparency Days,” events addressing human rights protection and the battle against corruption.

“The most important aspect of my position was always the opportunity to communicate, to create possibilities and win-win situations. The best outcome for me,” Pavlo says, “is seeing the results in new businesses established, new organizations emerging.” After the Kawasaki session, one of the attendees told him the training had motivated her to start her own business, and now she is a successful entrepreneur.”

But then came Euromaidan. “I was in Kiev from the day one of the revolution. I saw it growing,” Pavlo says. He watched the smoke rise from the burnt Central Square and followed the live broadcast revealing bodies on streets he used every day. “And after this you just cannot be the same,” he says. “Such images give you a strong will to change your country and the world for better using the peaceful instruments of mediation and agreement. I would like to live in the country where people don’t die because of politics and live in peace. That is how I became who I am right now.” Pavlo is highly concerned about the “conflict between Ukraine and Russian Federation which materialized in the annexation of Crimea, unrest in the East of Ukraine and, what is absolutely atrocious, in death of thousands of people.”

Pavlo served as a Human Rights Intern at the Ukrainian Helsinki Human Rights Union, analyzing legislation and court practice. Currently he’s a student of “European Legal Studies” in the Master program at College of Europe in Bruges, Belgium. He’s also improving his languages—“I’m a polyglot,” he says of his English and French, his working Spanish and Polish, beginning Italian and Czech, in addition to his native Ukrainian and Russian. He attends various international summer programs in Ukraine, Germany, and Estonia.

“As a pro-Western and pro-European Ukrainian leader,” Pavlo says, “I would like to actively participate in state-building and developing Ukrainian civil society, perhaps by monitoring the implementation of reform and serving as the European integration expert.” He’s also a creative person who writes music, sings professionally, plays guitar, piano and drums, and has had his songs aired on radio in Belgium. Ideally, he says, “I see myself as a cultural ambassador of my country to the world.”