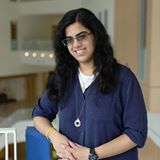 A vision of peace through interfaith dialog

While a freshman at Providence College in Rhode Island, majoring in political science with a Public and Community Service Studies minor and a concentration in Theology, Saadia Ahman occupied a unique position, that of straddling two religions. A Muslim at a Catholic college, Saadia faced occasional hostility from students and faculty alike.

A child during the 9/11 attacks, Saadia shared the sense of terror with other Americans and the need to restore security. Yet, as a Muslim, she says, “I know the exasperation of having our religion hijacked and used for something that was never its purpose. I understand the outrage of being held responsible for what we did not do.”

She attended mass regularly, but a few individuals consistently would not return her sign of peace, Saadia wrote in an article that appeared in America, the National Catholic Review. She also realized that “each of us can find scriptural or theological reinforcements to promote unity or division.”

At the beginning of her freshman year, the college’s chaplain had invited her to attend a Catholic worship service. “That single act of outreach and goodwill sparked a period of intensive spiritual growth and development,” Saadia says. “I realized a new depth in my Islamic faith that was previously inaccessible.” She describes “the most powerful, humbling moments” that took place during prayers in a side room of the campus chapel where she offered the traditional five daily Muslim prayers. “The gentle presence of music or choir rehearsal in the background served as a tangible reminder of God’s everlasting and intimate presence near us and within us, closer to each of us than we are to ourselves—as both religions remind us.”

On campus, she watched the priests in their white habits and rosaries and considered Muslim prayer beads in a new way. She hung them from her waist and prayed with them during the day. “I am a more prayerful, conscious and reflective Muslim,” she says. Paradoxically, it was a professor of Catholic theology that pointed out Chapter 5, verse 48 of the Qur’an to Saadia, which states, “If God had so willed, He could have made you a single people, but His plan is to test you in what He has given you, so strive as one human race in all virtues.” It became a treasured inspiration.

Saadia took Catholic theology courses, participated in campus ministry events, and served on the pastoral council. She enjoyed working on the editorial staff of the campus newspaper and being a photographer for the PC Magazine at Providence College for three and a half years, earning a top award. Additionally, she wrote articles that appeared in national publications, including “My Jihad” for The Huffington Post and “The Muslim at Mass” for the Interfaith Youth Core.

When her newspaper published an inflammatory anti-affirmative action op-ed article, Saadia was caught between two hostile groups, her fellow staff members and students with minority backgrounds. Though still untrained in mediation, she engaged in dialogs with both parties separately. She validated the concerns of her “diversity allies,” but she “cautioned their use of the term racist to categorize the entire newspaper staff,” Saadia says, reminding them not to “partake in the same behavior of generalization that disturbed them.” To her editorial staff, she noted that their opinions held merit, but “I provided a personal lens through which they could better understand why students of minority backgrounds reacted so strongly.”

Saadia struggled with “the lack of willingness from each side to move past their defenses and perspectives and consider the concerns and realities of the other….Dismissed and rejected by both groups,” she felt discouraged and exhausted. Peacebuilding through negotiation was her dream, but had she failed?

After the heat of conflict cooled, students from both groups initiated personal conversations with Saadia on topics ranging from diversity initiatives, affirmative action policies, and white privilege, and were “far more effective in achieving the ideal components of dialogue.” Later that year, she was honored with the first Trayvon Martin Award for Social Justice, given for her “commitment to building community across race and other forms of difference” and working on the “issue of ending racism” as one “whose efforts have produced change.” She also received the Providence College’s Class of 2014 Sister Thea Bowman Award for building bridges among people of different races, religions, and ethnic backgrounds. She was also nominated for the Emerging Leader Award at a student recognition dinner and ceremony.

Saadia went on to found the first Interfaith Dialogue Student Group and become a Dream Coach for a multicultural scholarship program. As a graduating senior, she was selected for a feature article for the “Lives of Meaning and Purpose” series.

On her last day at Providence, she attended a final Morning Prayer service at the priory chapel. Afterward, a priest Saadia feels blessed to have known told her that he’d offered mass for her that morning. She felt pleased and grateful and concluded by retreating to a corner of the chapel and performed her Islamic prayers. Another priest watched her and told her what she was doing was “very strange and extreme.” He stormed off, “slamming the door to the sacristy behind him.” In the article that appeared in America, the National Catholic Review, Saadia writes:

I imagine that both priests felt they were acting in accordance with the teachings of their faith. The intentions behind such actions are well beyond my right to judge, but what I can speak to are the effects of these actions on their recipient. One left me hopeful, the other distressed.

This is the choice we face as a society today, with interfaith harmony as one possibility and religious intolerance as another….We can either work to transform our world through religious understanding or slide further down the path of discord and division.

With a scholarship through a research assistantship placing her as a McCormack Scholar along with a Peace Education Scholarship from El ­Hibri Foundation, Saadia is now pursuing an M.A. in Conflict Resolution at the McCormack Graduate School of Policy and Global Studies at the University of Massachusetts in Boston, with a focus on religious conflict, interfaith dialogue and peacebuilding. Deeply troubled by violence among members of major world religions, Saadia hopes to gain experience in fields involving interfaith and intercultural dialogue, conflict resolution, human rights protection, peace and nonviolence, communications, journalism, advocacy, and international relations.