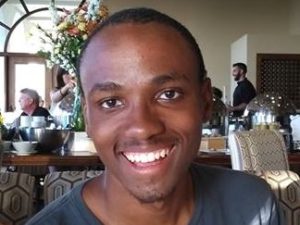 “Born in 1994, the year of South Africa’s first democratic elections,” Nkululeko Tsoketsi says, “my generation was dubbed the ‘born frees,’” yet he says his country is “one of the world’s most economically unequal nations.” Race primarily identifies its citizens. “The black woman who fought for freedom is violated by the black man she fought next to.” Rapes occur every twenty-six seconds here, he says. Protesters who risked imprisonment to fight for free education as “one body pressing forward to stun grenades and tear gas” are then silenced by those they prayed with who practice trans- and homophobia. “Everyone’s perpetrator is right next to them,” Nkululeko says, and “the sum of all this is a nation with a vigilant people who do not trust each other.” This distrust has escalated into violent xenophobia, the burning and killing of other Africans even though “the whole of African helped South Africa attain its freedom and democracy.”

Nkululeko quotes writer Toni Morrison’s concept that hateful prejudice is a distraction that keeps its victims constantly trying to prove the finger-pointers wrong, wasting precious time “explaining, over and over again, your reason for being…. None of that is necessary. There will always be one more thing.” This insight allowed Nkululeko to articulate his life purpose. “My number one passion,” he says, “is to remove the ‘distraction’ of the one more thing that always comes up,” and help free young people “from their predefined fates so that they too can self-actualize; to deconstruct gender, racial, and societal norms that bury marginalized parties in a loop,” struggling to claim their basic rights and dignity.

Named a Rotary Scholar by the International Rotary Club before his university years, he traveled to Germany, staying with a German family. In a Rotary exchange program for six weeks in Germany and Austria, he received training in global citizenship and cross-cultural tolerance. In 2014, he entered the University of Cape Town (UCT), majoring in Economics and Finance.

A self-described debating fanatic, he continued sharpening his logical presentation skills and reasoning by joining the Debating Union. Nkululeko also joined the Thethani Debating League, a society operating in fifteen under-resourced schools in Cape Town and employing debate as a tool for development. He first became the Logistics Coordinator, was promoted to Deputy Director, and now serves as Tournament Director. “I additionally liaised with various parties, such as private funders,” he says, “to not only ensure daily smooth running of the organization but also answer questions of sustainability and longevity.” He managed a budget of over 150,000 rand and later introduced cost-cutting strategies that reduced expenses and increased the surplus.

He also joined the campus Consulting Club, a social investment club, Connoisseur—UCT’s arts and literary society—and became its deputy chairperson. Then in 2015, he developed Connoisseur, a publication for the society, and grew its membership by 15%.

To further develop teamwork and professional communication skills, he plunged into Model UN (MUN) activities. He spent the summer of 2014 as a tutor and trainer to MUN delegates. Then in October, he was named Secretary General through the South Africa Planning Committee. In 2015, he served as the UN South Africa-UCT Subcommittee Secretary, helping to organize the country’s largest MUN Conference.

Heavily involved in social and community development, Nkululeko also tutored through TeachOut, UCT, working with senior boys struggling in English at the Mannenburg Leadership Academy. That same year, he was appointed Senior Mentor to UCT’s largest male residence hall, overseeing a team of 27 Junior Mentors while remaining accessible to 300 freshmen mentees. Most of these students were first-generation students, meaning the first in their family to enter a university, but they are “the living legacy of the country’s problematic education system,” Nkululeko says. To increase accountability of the mentoring process, he immediately lobbied for a Monitoring and Evaluations (M&E) Portfolio, the first of its kind, and led the setup of a confidential and professional evaluations system. The M&E initiative significantly increased the effectiveness of the program as shown by improved academic performance compared to previous freshmen classes and surveys that reported satisfied experiences.

“I find accountability so important,” Nkululeko says, “because it ensures that actual results are attained.” He calls it the “keep the main things the main thing” approach that he’s mastering as part of the Klaus-Jürgen Bathe Leadership Fellowship. Bain and Company’s Building Entrepreneurial Leadership Program also accepted Nkululeko into its year-long intense training and mentoring in management consultancy and relevant business skills.

Nkululeko considers himself “a versatile student who relishes a dynamic learning experience, taking courses in the Humanities as well as vocational studies in Commerce” to combine a unique approach to problem-solving and “a living and tangible spirit of innovation and accountability.”