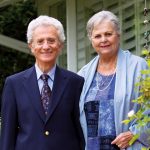 Anton (“Tony”) Dimitroff is the Trustee of the Fred J. Hansen Foundation, a non-profit charitable trust. As the Trustee, he is responsible for the programs that the Hansen Foundation sponsors and funds. He has, over the last few decades, conceived of and overseen the design of the various programs that the Hansen Trust has operated. In doing this, he has worked closely together with his wife, Gail Dimitroff. In 2019, Gail passed away and will be greatly missed for her insights and involvement in the creation and operation of the programs with Tony, particularly the Hansen Leadership Institute. Today, under their leadership, the Hansen Leadership Institute is a fitting tribute to Gail’s contributions.

Tony is a first generation American whose parents came from Macedonia and Bulgaria in the 1930s. His family believed in the value of education. With that goal in mind, he received a BA from Wabash College, a small all-men’s liberal arts college, then, on a Fulbright Grant, attended l’Université de Paris, l’Institut d’Étude Politique, and finally obtaining a law degree from the Yale Law School. His many years of private law practice, first for a few years in the Paris office of a large international law firm and then at a law firm in San Diego, gave him the skills necessary to manage the Hansen Foundation’s assets and finances, as well as its programs. 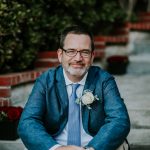 Brad Frazier joined the Hansen Leadership Institute staff in December 2018. Before joining HLI, Brad was an Associate Professor of Philosophy and Religion and Chair of the Philosophy Department at Wells College in Aurora, New York. He completed a PhD in Philosophy in 2003 from Saint Louis University. Brad also has a Master of Arts in Theological Studies from Reformed Theological Seminary. He is the author of the book, Rorty and Kierkegaard on Irony and Moral Commitment, published by Palgrave MacMillan in 2006. Brad also has published articles in journals such as Journal of Religious Ethics, International Philosophical Quarterly, History of Philosophy Quarterly, and Philosophy and Social Criticism, as well as book reviews for Notre Dame Philosophical Reviews and Metapsychology Online. In addition, Brad has contributed chapters to two books on philosophy and popular culture: The Daily Show and Philosophy, published by Blackwell in 2007, and Stephen Colbert and Philosophy, published by Open Court in 2009. He received the Wells College Excellence in Teaching Award for 2009-10, and the James Collins Memorial Scholarship for Outstanding Graduate Student in Philosophy at Saint Louis University for 1998-99. In addition to Wells College, Brad has taught at Lee University, Saint Louis University, Lake Michigan College, and Virginia Tech. He is an avid hiker and looks forward to exploring the deserts, mountains and forests of California and the West Coast, and to his new journey as the Managing Director of the Hansen Leadership Institute.