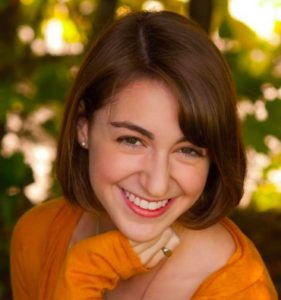 Combining her passions to pioneer in holistic international development

How does a big-picture person channel herself into a single career direction? When Jillian DiPersio graduated from high school, she thought she knew where she was headed in life. She possessed many talents and interests, however, and had earned recognition and awards in several fields. She could be a music major with her experience in the school band and with the Manchester Community Music School Wind Ensemble and Orchestra.

Or with her scholarly honors—AP Scholar with Distinction, Salutatorian, Derry-Salem Elks Teen of the Year—Jillian might pursue law. The French scholarship she’d earned and her summer spent as an English Language partner through Organization for Refugee and Immigrant Success (ORIS) suggested a direction that required foreign languages.

She’d volunteered at a retirement home, bringing the residents baked goods and Christmas presents, and began writing their stories. Jillian served not only as the editor-in-chief of her high school newspaper but also as a liaison and intern with Area News Group, reporting and photographing events. She felt satisfaction in seeing the retirement home stories published in the local paper and made a decision to enter college as a journalism major. That was in June before she interned with an ORIS summer program called Fresh Start Farms.

The ORIS refugees—Bhutanese, Somali, Iraqi, and Congolese—had all fled their homes because of conflict. Jillian did a newsletter and PR work, but she also helped a Somali refugee package her harvest shares to get to the market on time. Jillian found herself getting lost in the work, “in the dirt, in the green space, in the feeling of being part of a greater cause, something that was helping people. That was when I learned the therapeutic quality of dirt and fostering life.”

That summer taught her that simply reporting about life wouldn’t satisfy her. “I wanted to be part of the story, part of the solution to the world’s problems.” She wanted to help so that people like the refugees she worked alongside didn’t have to flee their homelands.

At the end of her freshman school term, she became a summer casework intern at the office of Senator Kelly Ayotte, doing office and PR work, interacting with constituents, and conducting research on current legislative issues, such as human trafficking. In September, Jillian became a legal assistant forthe Ponds Law Firm, doing legal research for civil, criminal, and immigration cases.

The following February, her love of nature intensified while volunteering at the US Botanic Garden in an ongoing basis, teaching visitors about horticulture and the environment.

After earning outstanding academic achievement awards two years in a row from GWU, Jillian was off on a life-changing experience. She volunteered to teach English and Information Communication Technology (ICT) classes in Keetmanshoop, Namibia in Southwest Africa where she would also do anthropological fieldwork in climate change-induced drought, which Namibia had been experiencing since 2012—research for her thesis.

At a primary school on her second day, she hastily used a presentation on the basics of Microsoft PowerPoint. There was no projector, however, and thirty antsy children tried to focus on an eleven inch laptop. Then her laptop stopped working. “The young teacher attempted to discipline students who acted out by hitting them with a pipe.” Jillian was profoundly shocked.

The bell rang, sparing her from taking any immediate action. She cared for and connected with the children, so she had to process a new approach. A powerful realization came to her. “To help them, I had to be a strong leader, not only for them, but also for their teacher.” Her job was temporary, but, she says, “He had more of an opportunity to make a difference in the lives of these children.” So, surprisingly, her challenge was to “help make him a more effective leader and teacher. I needed to empower him.”

Jillian found it difficult to empathize with the young man at first, but she worked hard, preparing lesson plans and finding creative classroom management techniques to model for him. One day, she was called elsewhere, but she learned that the teacher had taught the students a computer lesson in the lab all on his own. “I was overjoyed,” Jillian says. She saw that “leadership is the creation of change through empowering others.”

When she returned to GW in the fall, she continued her studies at the Elliot School of International Affairs with a major in International Relations, concentrating in international development. Jillian’s passion and interests evolved in new directions: anthropology and research. She became an undergraduate research scholar, focusing on government responses to climate change induced-drought in African desert climates for an honors thesis She soon became the Director of Operations for the Student Research Forum. She also coached a class in GWU’s University Writing Program in legal writing, teaching students to conduct research and write law review articles and memos.

In January, Jillian was able to combine several of her loves as an External Affairs intern for HarvestPlus, an NGO with a mission to improve nutrition and public health by developing and promoting biofortified food crops that enhance the intake of vitamin A, iron, and zinc, nutrients the World Health Organization deems most deficient globally.

Jillian is about to graduate in December 2018. She has earned many honors, including making the dean’s list every semester and joining the Midwest Political Science Association, where she was accepted to present her research at the annual conference in Chicago in 2018. While there she also presented a poster on her anthropological fieldwork in Namibia and her thesis on NGO- and governmental-led environmental development in Southern Africa. Pointing to the gap between research and successful implementation, Jillian believes climate change must be considered, not just by the hard sciences, but also anthropologically as it interacts with development efforts. Working with local populations, she stresses, is essential in developing solutions to problems like climate change. Jillian offers her approach to influence international climate change policy in the way in which NGOs, civil society, and governments interact to develop solutions, “so the beneficiaries of development projects truly benefit,” thus enabling resilience to changing climates.

“My research has focused on the social effects of desertification and drought,” Jillian says. “Through conversations with local professors, livestock farmers, and government officials my hope is to propose policy solutions to desertification in other parts of Africa.” This approach, “the coming together of scholarship and implementation will be an effective means of achieving meaningful, sustainable poverty alleviation.”

Her story collections become anthropological articles instead of journalistic ones. Addressing climate change makes Jillian’s love of earth and people a priority. She is becoming a leader in the field of international development requiring the use of her data and research skills, along with the ability to speak more than one language. Jillian has found a way to devote herself to the things she loves most and help build a stronger, more peaceful, and equitable world in the process.