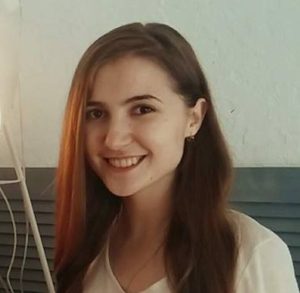 Working step by step toward a brighter future in Ukraine

The beginning of the Revolution of Dignity or Euromaidan is a date on which every Ukrainian remembers exactly where they were when they got the news. Ivanna Fitas, an eighteen-year-old student of the law faculty of Ivan Franko National University of Lviv, sat in a lecture hall. She was trying to concentrate on law, but she kept thinking about the actions of the president of Ukraine at the time. He’d refused at the last minute to sign a popular agreement of association with the European Union, and Ivanna felt terrible about it. A fellow student entered the lecture hall and announced that a group of protesters was gathering. “At that moment I felt that I had a voice and could use it to express my desire to sack the state,” she says. She hurried to Lviv’s central square and joined like-minded friends. That morning marked a turning point. She knew she would always work toward the dignity and liberty of her country.

The conflict quickly compelled international involvement and after four years, has caused over 10,000 fatalities so far. “From my own experience,” Ivanna says, “I can say that war can never bring happiness, become a solution, or simply not make an impact on someone’s life. Society becomes depressed. Can you imagine how it is to hear day by day about numbers of people killed, homes destroyed, how dead bodies are roughly called a cargo?” She hates hoping a certain person would be injured so he would have a chance to back home alive. “That’s what conflict looks like. That’s what war looks like. A fragile peace is better than even a shadow of a war,” she says. The economy of Ukraine weakens steadily and poverty spreads. People are “exhausted and frightened, waiting for a miracle.”

Ivanna believes individuals can become the miracle her people need. People fortunate enough to get a good education bear the responsibility to become the miracle, she says. “My education gives me more chances to implement positive social development. To change the country you should first educate its citizens.”

With that in mind, she’d begun volunteering for UNICEF that semester, teaching children. She spoke of relevant policies at a local Ukrainian parliament simulation offered by a small association of law students together with the Lviv city council and won Best Speaker.

Active in Lviv Ukrainian Bar Association Students’ League, Ivanna served as director of the social department. After creating a team, the group visited elderly people, providing them with free legal advice, collected money to install a sports field for people with special needs, organized round-table discussions on gender equality, and more. Not only did the group help people in need, she also learned from them “to stay strong, open-hearted, and see positive sides of every situation.”

As Vice-Head of the league through 2017, she helped guide her organization in an international direction, arranging events with high profile leaders and helping interested students participate.

The group also helped organize an E-Governance Forum featuring over fifty Ukrainian and foreign experts and 200+ participants. They conducted a National Securities and Stock Market School with 120 participants and a National Commercial Law and Procedure School.

Ivanna spearheaded the organization of at least five moot courts without government support, three at the national level. She and her organization found funds, investors, judges, and lawyers, attracting some of the best professionals in the country and well-known specialists from abroad. They ran the advertising campaigns and arranged for accommodations as well. Ivanna and her team organized over fifty local events, and eleven regional, national, and international schools. “At the end of a year,” she says, “we were recognized as the best regional branch of the whole UBA Student Branch organization.

Somehow, Ivanna found time to set up an International Debate Tournament “Lviv Open” together with the Debate Federation of Ukraine and organize an Amnesty International Letter Writing Marathon in 2015 and 2016 at her university where citizens write millions of letters worldwide for people whose basic human rights are under attack.

Fortunately, she earned two government scholarships, allowing her time to volunteer and work pro bono as a legal advisor at the university law clinic. She put in full time hours from July to December of 2016 at the Arzinger law office as a trainee and gained additional professional experience as an intern with the regional military prosecutor’s office and the district court.

During school breaks, Ivanna further enriched her studies with classes abroad. In Prague she participated in the American Institute on Political and Economic Systems (AIPES), drawing international students together to explore issues related to political philosophy, economics, and conflict management. In Warsaw, Ivanna attended the Capital Market Leaders Forum to discuss the developing market economies in Central and Eastern Europe.

Last summer Ivanna helped organize the Lviv Leadership Academe, an international program on strategic leadership, conflict management, and democracies in transition. Before finishing her master’s degree, she focused on mentoring the next generation of UBA Student League members. Grateful for her education and experiences, she wanted to give back, helping to advise and support the development of the younger generation.

“No one says I should start with something giant and majestic,” Ivanna says. She prefers a step by step approach toward an achievable goal. Though young, she is full of energy and gives lectures promoting and informing people about Ukraine. Briefly, she worked at a law firm and also cooperated with the Dutch Consulate to help create a positive investment climate, nourished by recent positive reforms. Currently, Ivanna works at the largest Ukrainian IT company. Her constant goal is to “help create a community of peace-oriented people who will share their knowledge and build a new society, free of violence and war, offering a bright future to its people.”