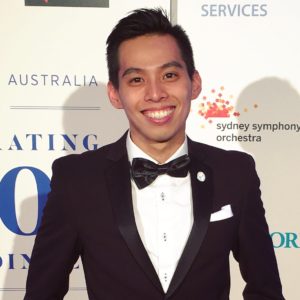 Kingsley Nguyen’s father took him by long-distance coach to see what would become a powerful symbol in his life, the My Thuan Bridge in the Mekong Delta region of Vietnam. Illuminatedin the darkness, the futuristic bridge stood majestically before seven-year-old Kingsley, its two sleek towers jutting over 400 feet into the sky with mighty suspension cables fanning outward. Kingsley was awestruck.

Born in a small village in Southern Vietnam, he loved school, but during monsoons,he waded through floodwaters to get to class due to poor infrastructure. Lack of electricity often forced him “to study by the dim, smoky glow of kerosene lamps,” he says. Kingsley’s father explained that the bridge—a joint venture between the Vietnamese and Australian governments—offered the sixteen million people in the region an improved economy and access to better healthcare and educational facilities. The powerful impact of technology and international cooperation impressed Kingsley. He was determined to use the two to make a positive impact upon society, a big dream for a child of seven.

In 2010, Kingsley’s parents sacrificed to send him to Australia in his teen years to give him a chance at a better life. He arrived “without being able to string a coherent sentence together in English.”While a new chapter had begun, the reality of alien surroundings proved daunting due to cultural differences, racial discrimination, and financial hardship.

Despite these struggles, and with perseverance and determination, Kingsley managed to juggle multiple jobs while maintaining an excellent academic record and learning to master English. He graduated from high school as valedictorian with a near-perfect score, earning a Western Australia Best and Brightest Award from the WA Department of Education. Kingsley then received an offer to study Engineering and Science at the University of Western Australia in 2013 with many scholarships and prizes.

During his undergraduate years, Kingsley was involved extensively with Teach Learn Grow, an organization that aims to bridge educational disparities for disadvantaged and indigenous children to insure equal opportunities. He volunteered to be a tutor and team leader in many volunteering programs, delivering hundreds of hours of pro bono tutoring to students in rural areas. Recognizing that many young students suffered from low self-esteem, Kingsley offered an empathetic hand, hoping that sharing stories of his journey and aspirations would help them develop a stronger sense of self-belief. One ten-year-old indigenous girl named Skye stands out in his memory. “…Maybe I will become a toilet cleaner like my mum,” she admitted to Kingsley, who responded, “You are clever, and you can be whatever you like. There will always people who tell you that you can’t do something due to your background or gender. Don’t listen to them. Dream big, work hard, be humble, resist complacency, and success will pursue you…”

Kingsley also became a mentor and ambassador at his university, helping new students settle into campus life, along with joining the UWA Young Engineer club, wherein he connected Engineering students with the industry by organizing social and professional events to help them gain insights and enhance their career prospects. In addition, Kingsley has served as a teaching assistant at his university’s Engineering and Science faculties for the past three years.

Kingsley is equally passionate about global mobility. In 2014, a UWA exchange scholarship took him to the University of Manchester, in the UK, where he focused on chemistry and earned academic and leadership distinctions. In 2016, selected by the Australian Government’s Department of Foreign Affairs and Trade, he would represent the Australian government as an ambassador, living, studying, and undertaking internships in the Indo-Pacific region to deepen Australia’s interpersonal relationships. Able to speak basic Japanese, he attended Nagoya University in central Japan to study automotive engineering, environmental sustainability, and international development, additionally teaching English to children and preteens.

Asked his secret in gaining so many scholarships, Kingsley says, “The fear of failure is worse than the failure itself.” He just kept applying. “Six years after migrating to Australia, I became a New Colombo Plan scholar,” he says of this vital milestone in his life.

Kingsley was beginning to see that, “Although my academic program has equipped me with a core set of technical skills, those alone are insufficient to address complicated global issues. We live in an increasingly challenging world with finite resources, and engineers must be able to operate within more complex sets of constraints—with trade-offs and conflicts inherent in every decision.” Therefore, he decided to intern in various global firms in many different sectors, including financial services, investment and trade, engineering, and international civil service.

This revelation has incentivized him to intern in various global firms in many different sectors, including financial services in Hong Kong, and investment and trade in Tokyo. A highlight, however, was the internship with the United Nations Economic and Social Commission for Asia and the Pacific in which he joined a team responsible for managing the “Integrated Resource Management in Asian Cities: The Urban Nexus.” This project stresses the holistic approach Kingsley champions: the interconnectedness of water, land, and energy; sustainable development, economic analysis, and social analysis.

The effort entailed organizing a regional conference in Indonesia, drawing more than 150 participants from twelve cities across the Indo-Pacific region, working with national coordinators in seven countries to develop training workshop materials, policy recommendations, and logistics. “It was one of the extremely rare cases in which the UN sponsored interns to facilitate an international event,” Kingsley says.

Working in Perth to support the Prelude FLNG, a floating liquefied natural gas platform and the largest offshore facility ever constructed, Kingsley served as a process engineer. Thousands of times more complex than the mighty My Thuan Bridge he’d seen at age seven in Vietnam, the platform has required extensive international cooperation. “I envision myself to be a technical expert with cultural awareness,” he says,“one who understands the importance of bridging and integrating seemingly discrete areas of governance, technology, and business strategies”—in other words, becoming a human bridge.