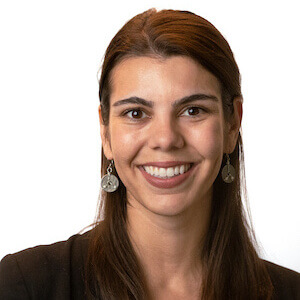 We are a global community and share a strong common humanity.

“I grew up in a middle-class Caucasian family in the Midwest,” Anna Cron says of her shady suburb of Minneapolis and was “raised in a privileged household, attending private schools and studying among predominately white peers.” She looked forward to skating competitions, performing in ice shows, and, occasionally, attending the famous Minnesota State Fair, also known as The Great Minnesota Get-Together. “I was unaware of the adversities many people around the world face,” she says. There was no reason for her to leave her comfortable world, the campus of College of Saint Benedict where she was majoring in political science and Latin American studies. Yet textbook explanations of historical forces didn’t satisfy her. She craved a deeper understanding. “This curiosity led me to put myself in uncomfortable situations,” she says.

Her first uncomfortable situation took place the summer she lived in Banja Luka and served as an intern at the Center for Civic Initiatives, the largest public policy organization in Bosnia and Herzegovina. After the genocide in the 90s, “even the country’s political system is ethnically divided—the Chair of the Presidency rotates amongst three members: a Bosniak, a Serb, and a Croat,” Anna says. She initiated outreach programs to improve government accountability along with “street events” engaging citizens in the democratic process.

During the spring semester of 2015, Anna signed on for a Semester Abroad program in Guatemala. Her host family employed a Mayan girl named Gualda for daily household duties. “Each night Gualda and I bonded over dramatic telenovelas (Spanish soap operas) and cookies,” Anna says. Gualda hadn’t received a formal education, though her employers had offered to pay for her to attend. She refused the offer at first, but “Gualda wanted to learn, though she’d grown up in a society where Mayan girls were expected to work domestically. I worked endlessly to encourage her to attend school, and I’m proud to say that right before I left, Gualda started attending school.”

Next, Anna traveled to Washington, DC to serve as a summer intern for the Organization of American States (OAS) as an international electoral observer, helping with the design and implementation of international standards for electoral processes, speaking only Spanish with highly skilled co-workers from eight countries. She saw the outcome of her work in October of 2015 when she returned to Guatemala to observe the presidential elections in different communities and help ensure eligible voters had the right to a secret and equal vote.

Then in December came the highlight of her college career. She was working on a student-led documentary through Extending the Link (ETL), a social justice film organization that creates an annual documentary. Anna was named co-director, and her team focused on women in agriculture in Minnesota as well as in developing countries because Women tend to have less access to farming resources than men have, resulting in lower production levels despite equally arduous work.

Rwanda had made remarkable progress since their civil war and genocide in 1994, which had left a work force made up of 70% women, so Anna’s film team traveled to Rwanda for eighteen days. They met with government agencies, NGOs, and farming women. Serving as an example to other post-conflict societies, Rwandan women reconciled and rebuilt the country, choosing forgiveness over retaliation.

The completed documentary, Ubumwe: Together We Grow won several small awards, the most exciting being from the National Academy of Television Arts and Sciences, Upper Midwest Regional Student Production Award. (https://www.youtube.com/watch?v=Tb2Rhw90PcQ)

Anna worked with Youth Frontiers, facilitating character-building retreats and as a Spanish Instructor before joining the Peace Corps to promote Spanish literacy. “I revamped a literacy diagnostic tool for 83 volunteers to evaluate students’ literacy levels throughout the country and a database to house the data for past, present, and future volunteers to reference,” she says. Collaborating with the Ministries of Women and Education, Anna conducted gender equality in-service training and a conference, training 163 individuals on methodology.

Anna has worked with teachers, administrators, district officials, and NGOs to get resources from urban areas into rural areas. She met with her local Rotary club to share the powerful impact children’s books and literacy materials have on student’s cognitive development and in training teachers. Rotary then shipped thousands of such books to the Dominican Republic.

Anna also tutored Dominican students’ in their homes. Teachers and specialists had convinced the mother of a girl named Jenny that she was incapable of learning, but Anna encouraged Jenny using simple concepts that began to click. One day her mother told Anna how Jenny had demonstrated subtraction and addition while preparing habichuelas—beans, proving Jenny could learn, given the chance.

“I cannot live life walking away from projects, initiatives, and people that I do not agree with if I hope to instill a change,” Anna says. “Through the trials and triumphs of development work, I am invigorated to help those underserved gain the resources and support they need. If I see injustice, I must work to change it.”