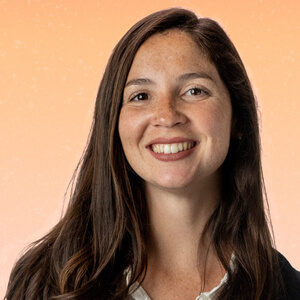 I believe innovation is a way of looking at reality.

Rosario is the largest city in central Argentina, spreading outward from a busy shipping port on the mighty Paraná River northwest of Buenos Aires. Sol Santos says, “We have many skyscrapers that cohabitate with houses that don’t have food to put on their tables.” She felt lucky to start ballet at age four, attend private school with her sister, and help in her church group, but at age ten, her family’s finances weakened, and she entered public schools, finding friends from many diverse backgrounds. Her high school specialized in the arts, and she performed with classmates in parks and for children and geriatric centers, “with the only purpose of making people smile.”

Rosario has a poverty rate of 29%, Sol says, and an average of 250 homicides per year. Thieves have stolen from her twelve times and robbed her home twice, so she has relocated many times in search of security. Such problems come from hunger, she says. “The most violent cities today are not the poorest, but the most unequal.” She has found that social polarization occurs where citizens’ security is threatened, so “they prefer to distance themselves instead of looking for ways to integrate marginalized people into society.”

Sol has a different response. “I believe that some people are born with a spark of service in their hearts. Others develop it along the way. What I want is to inspire people to develop that spark of service in order to make this world a kind, honest, compassionate, and just place to live.”

While working her way through the Universidad Nacional de Rosario (UNR)—as a Zumba instructor in three gyms, doing office and marketing work in a real estate agency, and selling cosmetics—Sol focused on political science and international relations. She also found time to volunteer for the Cuban literacy program, Yo, Sí Puedo (Yes I can). Through this program, she worked in the Penitentiary System of Santa Fe for three years, educating prisoners—a basic right that had been denied them.

“The places where they were born condemned them,” she says, “and the prison itself doesn’t do anything to change that….This program reaffirms their self-esteem and quality of life as literate adults, and it is an incentive for other prisoners to become literate.”

Fernando, an inmate, asked her to translate a message in English his daughter had sent: I love you. He was deeply moved at the words’ meaning, and Sol found the experience so profound, she decided to hold workshops in English.

She’d studied English at Embassy CES in London, UK, and gained certification through Cambridge Assessment International. She plowed through “all the endless bureaucratic procedures necessary,” and in two weeks, her English Workshop began. “When I start with a new group of students, they always ask me: why are you here? If nobody is paying you for this, why are you still coming?” Her answer is always the same: “I’m here because I want to be.”

Now six volunteer teachers help three different levels of English, other foreign languages, first aid techniques, guitar lessons, history, math, and even poetry. “We work as a team, not only the volunteers but between the prisoners and with the prisoners as well.”

Another inmate, Danilo, studied in the English workshop for three years and received an A+ for the first time in his life. He was thrilled and grateful, and Sol felt an overwhelming sense of satisfaction. “I’d managed to encourage the inmates towards a permanent growing, where the desire to learn is endless; to dream beyond those prison bars.”

She decided to start an NGO “that provides social inclusion to all those people society had once excluded.” It is a tool to give sustainability and sustenance to the workshops and other existing projects, aiming for better social reintegration upon release from prison, thereby also improving the well-being of the entire society.

“We need different ways of thinking to respond to the current world challenges, such as dialogues between different sectors: public, private, non-governmental, economic, political, and social,” Sol says. “So, I need to continue training and improving myself.” She traveled to Chile to attend a leadership institute at Universidad de los Andes in Santiago and a program in Santa Cruz on challenging paradigms at the Foundation for Progress. In January of 2018, she was awarded $8,000 for a six-week course at University of Texas at Austin in Global Studies and Foundations of International Relations, funded by the Ministry of Education of Argentina and the US Embassy through Friends of Fulbright. She also attended the Fulbright International Seminar for Young Leaders in Argentina, jointly offered by Fulbright and the Universidad de San Andrés. Then in Spain, she participated in the Botin Foundation’s Program for Strengthening Public Service in Latin America, which continued in Rio de Janeiro, Brazil. In Buenos Aires, she participated in a congress on changing roles that explored the use of crypto currencies.

Sol is always “doing something more, going forward, and seeking new experiences.” She’s conducted research at UNR on “Violence and Politics,” and also for the Ministry of Education of Santa Fe province. Her research at UNR continues through the Electoral Political Observatory and as a member of the Security, Government and Society group. Sol has tutored through UNR and taught for the Association of Help for Neighbors at the House of Luxembourg. She enjoyed participating in UNR’s Model UN of Latin America and the Caribbean (MONULAC) and another MUN at the Universidad de Cuyo. Sol continues to volunteer for human and civil rights work in various communities through Manos a la Obra, Jovenes Iberoamericanos and others.

“We have just published a book written by fourteen prisoners at a literature workshop, including the work of a recently freed prisoner. It was an incredible experience and a really important symbol, a powerful incentive for the inmates,” Sol says. Her personal mission is “to find tools that allow us to live in more just and peaceful societies.”