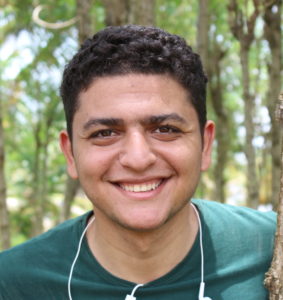 Born into a thriving metropolis built on the western shore of a lake, Mohamed AbdElgawwad has brains and talent and attends college like other promising young people the world over. His home town has a rich archeological heritage, celebrates the arts, is fanatical about its soccer team, and is dubbed “The City of Beauty and Enchantment”—Ismailia. Its lake is part of the Suez Canal, midway between Port Said and Suez. On the opposite side of the canal lies the Sinai Peninsula, and there is trouble in Mohamed’s potential paradise.

He begins a talk to HSI fellows by saying, “I had to come to Southern California to learn how Egyptians walk.” He assumes the comedic stance in profile, hands at sharp angles in imitation of the Egyptian hieroglyphics featured in the famous pop song, “Walk Like an Egyptian.” (His department’s Science Got Talent competition awarded him first prize for his stand-up comic act.)

Despite his wonderful sense of humor and gentle nature, massive problems confront Mohamed. The government has promised for decades to create a naval, industrial, mining, agricultural, and tourist zone in Sinai, but the area has remained “without development,” Mohamed says, “so it became like a crack-house for the terrorists.”

In the city of Arish near the Gaza Strip, warnings appeared everywhere, and several Christians had been killed over a three week period in February of 2017. Mohamed’s mother woke him early one morning, saying. “ISIS drove out all the Christian families from North Sinai, and they are coming to our city.” He quickly joined hundreds of volunteers to help Christian refugees who fled their homes.

Mohamed listened to their horrific stories. After two atrocities, militants had posted death threats on line and on doors in Arish, warning that inhabitants would be killed if they didn’t leave. Egyptian security forces could barely protect themselves, let alone a city.

Profoundly disturbed, Mohamed sought answers to difficult questions, like, what motivates people to terrify and harm thousands of innocent people? Since he cannot believe that anyone is 100% evil, could there be a way to touch the part that is still good? Can such hard people be transformed? He would finish his semester at Suez Canal University, yet he knew his life’s direction was changing.

At the time of the 2017 Christian exodus from Arish, Mohamed already considered himself a “revolution guy” and calls January 25th, 2011 his second birthday, the day Arab Spring revolution started in Egypt. He was sixteen, and “got the short, sweet, and swift whiff of democracy.”

On June 30th, 2012, Mohamed Morsi was elected president in Egypt’s first public elections. His rival—a man Mohamed describes as Egypt’s Bernie Sanders because of his appeal to youth—had split from the Muslim Brotherhood and had run as an independent. After losing, he formed the Strong Egypt Party, which Mohamed joined right away, continuing to volunteer when his classes started at Suez Canal University that September. With his avid interest in science, Mohamed chose microbiology as his major. He was also interested in leadership, but SCU lacked a political science faculty.

Protests continued, and after a year, democracy, as Mohamed sees it, “was stomped on and repressed by the resurgent dictatorship. The military coup,” he says, “turned my dreams for freedom of speech, human rights, better education, and even dreams for a future career in politics into nightmares.”

A violent crackdown occurred, especially in Egyptian universities, killing hundreds of demonstrators. The Ministry of Higher Education suspended all campus political activity, including elections for student unions. “We count on student unions to prepare tomorrow’s leaders,” Mohamed says, “so I started to look for an alternative approach.”

The alternative didn’t happen right away, because he was busy being “the revolution guy,” attending off-campus meetings of the Strong Egypt Party, learning a lot about leadership while he also attended to his studies. He also participated actively in the drama club for a year and a half, won a Famelab prize, and attended an International Youth Science Forum in London.

During the fall semester of 2015, Mohamed designed a training program for fourteen freshmen that provided orientation workshops and sessions on leadership. Afterward, these students asked him to formalize these activities into a student club that would also support other students scientifically. Over the next seven months, Mohamed brought in “trainers in project management, team building, fundraising, digital marketing, and human resources” to the “Awareness and Development Club.” In March, 2016, the club held a science festival, the biggest event in our faculty history, and had grown to a membership of sixty.

Mohamed’s mentor professor writes that Mohamed has “exceptional ability to analyze advanced scientific theories” and out of class, teach “how to create change and social responsibility.”

In early 2017, the ISIS attack made Mohamed take stock of his life. He took a break from college to go to India and join the Art of Living fellowship for eight months, an organization known for solving violent conflicts and bringing inner peace to traumatized victims. The leader and founder asked Mohamed to present a program idea to address conflict throughout the Middle East. Mohamed’s resulting “Arab Youth Peace Ambassadors Initiative” aims to select “young global citizens already transforming their communities” to be trained in “conflict resolution and peace-building practices.” They would then return to their homeland to mobilize university students to conduct peace forums. “Peace-building,” he says, “is a broad process which may include development, education, sports, and for sure, science.”

Mohamed believes in “building youth capacity,” because Arab young people aged 15-29 constitute over 32% of the population in the Arab region, numbering a hundred million. They are the ones suffering from the results of conflicts either directly or through the resulting high levels of unemployment and lack of education and social services.