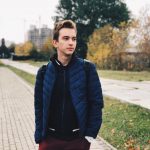 I may come up with ways to mitigate the aftermaths of political agendas on Russia’s economic and social well-being through reasonable dialogue and cooperation.

At the southeastern base of the Ural Mountains, lies the city of Chelyabinsk, where Ilya Pozdnyakov was born and raised. As a major industrial center in Russia, it is likened to Chicago by some and considered a gateway to the vastness of Siberia. The headline grabbing meteor blast of 2013—many times more powerful than the atom bomb dropped on Hiroshima during WWII—exploded mid-air near Chelyabinsk, causing minor damage and injuries but no deaths. Ilya left his home town not long after that, flying west for two hours and twenty minutes to settle in Moscow.

“I love this city with all my heart,” he says against a backdrop of the Moscow skyline at dusk with the Moskva River curving around the soaring Federation and Oko Towers, the three-tiered Mercury City Tower with its copper gleam, the Evolution Tower, twisted in a magnificent double helix, and others. “It’s vivid, lively, and exceptionally beautiful. It’s like the New York of Russia. From my standpoint, it is one of the most open-minded cities in Russia. The city is home for business high-flyers, artists, scientists, and financial analysts.”

“I have always been interested in math and foreign languages,” he explains, “but I couldn’t choose between these two fields, so why not combine my two passions into one?” For Ilya, his chosen field is vitally important, representing “a symbiosis that suggests the use of diplomacy and intermediation in the field of economics. Politics is all about economics.” As a freshman, Ilya had joined the student council, an economics club, and a business club, concerned with immediate events, but his pragmatic thinking includes the necessity of long-range goals, like the UN’s seventeen Sustainable Development Goals (UN SDGs). There is much to be done, he says: “the global heritage is to be maintained and left in mint condition for the following generations, the wars are to be stopped.”

The achievement of such far-reaching goals begins with dialog, so Ilya and his friends organized an international youth conference on SDGs to be held at MGIMO. Ilya was head of the conference’s media and PR department; he created the overall scope and theme, negotiated with foreign partners, supervised the team of designers and journalists, and framed the methods and means of achieving the goals and the discussions of attendees’ shared experiences. They received hundreds of applicants from thirty countries and drew a huge response in the media. The Global Climate Change Conference (GLCC 2016) at MGIMO “was the first climate conference for young leaders of its kind,” he says.

Conference attendees produced sets of instructions for their respective governments concerning climate action, which included reducing CO2 emissions through the use of renewable energy sources wherever possible. Delegates also developed the idea of measuring countries’ progress in achieving SDGs, hoping to establish a powerful incentive for tackling the issue of climate change. “The formal result of our work was represented with innovative ideas that were later sent to the UN.”

In 2018, Ilya was invited to take part in the Global Youth Forum dedicated to SDGs in Bahrain. Also in that year, he served as an intern for an NGO, the Russian Council on International Affairs doing international assessment, analytical work, reports, articles, and opinions. He worked as an intern for another NGO, the Russian Trade and International Economic Relations Council, doing the same kinds of tasks, plus business correspondence.

“I aspire to be in the position to discuss debatable issues on international platforms (summits, conferences, forums and international organization) and offer novel points of view,” and his dream is to volunteer in a UN program to make a personal contribution to helping communities and the world. A top priority for Ilya is discovering ways to “mitigate the aftermaths of the political agenda on Russia’s economic and social well-being through reasonable dialogue and cooperation….The US and Russia have historically had an important link between each other, and I believe that we can enhance it and bring it to a whole new level.”

“We are ingenious,” he says of his fellow Russians. “We’re able to find a solution to literally any problem.” He pauses to smile. “Another thing, is that we sometimes create these problems ourselves.”

“We embrace new things,” he says, referring to his fellow citizens’ obsession with gadgets, technology, and pop-cultures—as evidenced by the huge sales of Apple products and the popularity of the TV series Game of Thrones.

“The only reason Russia seems so weird is because it is different to your own experience, and this is true for any country. Go travel and embrace the ‘weirdness.’” Ilya adds a friendly reminder: “Despite all the political tensions, we are human beings, and we are open to cultures and people.”