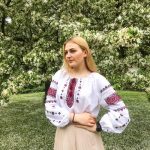 “Ukraine is not really a united country,” Halyna Moroz says, explaining about the long-standing divide between the western and eastern part of her country, which led to the proliferation of separatist ideas in the region of Donbass. War had always seemed remote to Halyna, something limited to history books, “but then 2014 started and Ukrainians felt its cold breath right on their necks. I remember my mother crying in front of the TV when Ukrainian soldiers were killed trying to withdraw through a humanitarian corridor in encircled Illovaisk. I remember my neighbor who came back from the front line saying that he got out of hell. And I remember the moment when my father received a letter saying that he was going to be mobilized into the army.”

The whole country deteriorated, currency depreciated, prices inflated, and people fled the country. “I find it extremely irresponsible to ditch your own country when it needs you the most,” Halyna says. Who would make things right? “If not we, then who?” Such feelings gave rise to the Revolution of Dignity and explain how “Ukraine manages to deter Russian aggression. Because people believe in Ukraine. I believe in Ukraine.”

That summer of 2014 made Halyna realize “that I couldn’t just sit back with my hands folded or, even worse, escape from the country—as my parents were going to do.” The family lived about seventy-five miles from the Polish border. She decided to become an international relations student “to help to build the international image of Ukraine as a reliable and influential partner capable of developing friendly and long lasting connections with other countries.” She also hopes to help establish effective communication within her country. “How?” she asks. “By hands of youth, of course. By student exchanges, cultural events and volunteering. We need to speak to each other and work together in order to hear and understand each other.”

Different religions, races, and genders should coexist peacefully. “Maybe I sound a little presumptuous, but I am really certain that I can make some difference—at least in my country which is still full of prejudices and stereotypes, artificially divided by languages, and inhabited by people afraid of actions.” She says that Ukrainians are historically pessimistic, but Halyna is the opposite. “We, and only we, are creators of our lives, our country, and our world. It’s not about the next election; it’s about the next generation.”

Halyna describes a simulation game played at her college, the Institute of International Relations of Taras Shevchenko at the National University of Kyiv. Two groups of international relations students, “dreaming of becoming diplomats, ministers, or even presidents” had to negotiate over a box of sweets that lacked enough to go around but carried points toward the final grade in the class. “For me,” she says, “it was not about points or being the first in the list of excellent students. It was about being a real leader who can give something up in order for the others to gain what they really need.” Some students needed the extra points more than she did, so, so she conceded her potential share. “You should have seen the face of our teacher when almost everyone did the same—except the most inveterate valedictorians. Most calmed down and agreed that our task was not to cut the throats of each other but to negotiate and come up with a resolution.”

Halyna’s willing compromise was rather surprising, considering her enthusiasm for intellectual competitions. She’d earned a Presidential Scholarship from Ukraine’s Ministry of Education and Science. A formidable member of her university’s debate team, she’d previously won Student of the Year in Volyn Region from the City Student Organization Erudyt of Lutsk City Council. She’d won a national geographical tournament, a second place in an historical Olympiad, and a third place in scientific research competition in Ukrainian philology. And in April 2019, she won second place in an all-Ukrainian student scientific research competition with her paper on the Islamization of Russia and its impact on Russian domestic and foreign policy.

Another of her passions is travel, and through the Education Program on European Studies, she combined travel and learning about the inner workings of European government and diplomacy. Her group visited the Senate of the Parliament of the Czech Republic in Prague; the Nuremberg Palace of Justice in Germany; and in Paris, the Council of Europe, European Parliament, European Court of Human Rights, the Senate of France in Luxembourg Palace, and the Embassy of Ukraine to France; and the European Commission and European Council in Belgium.

Halyna was awarded a Scholarship for EU Studies in Latvia by the Ministry of Foreign Affairs of Latvia, designed exclusively for Ukrainian students to share Latvia’s experience of EU integration and promote similar progress within Ukraine. Over three months she met with scholars and public officials who inspired her “to lead my country to where it belongs—to Europe.” While in Latvia, she joined the German club and also traveled to Lithuania, Estonia, Finland, Sweden, and Norway.

Returning from Latvia, Halyna worked as an intern for the Lutsk City Council in its international cooperation and project activities department. Back at her university, she joined the Youth for Peace. Over winter break, she began an internship with the Verkhovna Rada of Ukraine, its unicameral parliament, in the Fuel and Energy Complex, Nuclear Policy and Nuclear Security Committee.

“If I can make friends abroad,” Halyna says, “why can’t Ukraine do the same? It can and it will, and I will lead it into that.”