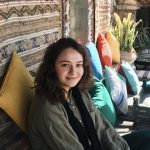 More than anything else I want to believe in Georgia’s democratization process with the goal of integrating into Western Institutions (EU, NATO).

“It was in August of 2008 when I realized the world is not as wonderful and nice as I used to see it,” says Elene Janadze. “Horrible things happened. More often than not, reality appears to be cruel, and being ‘realistic’ tends to be the main aspect of maturity. Even though I was not ready for growing up, that year I was obliged to become a ‘realist.’”

Elene was eleven years old at the time Russia attacked her country, Georgia, under the pretext of saving Russian citizens within its separatist territories of Abkhazia and South Ossetia—a pretext they later used in Ukraine. Russian tanks rolled through Georgian cities; the Russian navy attacked and blockaded Georgian ports on the Black Sea; Russian air strikes hit targets even in the Georgian capital, Tbilisi—where Elene lived with her family. People were killed, homes lost. “Total nihilism, fear, and skepticism are often found in Georgian society,” she says. In the disputed Abkhazian territory, Russia now maintains over thirty military bases along with naval and air bases and a similar number of bases in the disputed South Ossetia region.

“For me, the Russian occupation and my Aunt Eteri, who always spoke in Russian, somehow exist together,” Elene says. “I hate the former as much as I hold affection for the latter. Eteri’s only son was killed in the Abkhazian war.” Her aunt held her feelings inside, but Elene held burning questions.

She loves her country. “Somehow being Georgian has always been an important aspect of my identity,” she says of her love of the “unique Georgian language, rich literature, architecture, and polyphony. It was through Georgian literature that I started exploring the world.” Yet, she had already started questioning the “universal truths” offered by teachers and relatives.

In high school she won Georgian National Olympiads in Georgian language, literature, and geography. In her late teens, she was competitively selected to study English in the UK through a scholarship from the Georgian Ministry of Education and Science. As a successful high school graduate, she scored 100% on the Centralized University Entrance Examinations, earning a gold medal from the Ministry and a generous grant.

Elene entered the premier university of Georgia, the Free University of Tbilisi, majoring in International Relations and Middle Eastern Studies. She immediately joined the Future Diplomats’ Club, where, beginning in her sophomore year, she began giving lectures on Diplomacy and International Organizations.

Elene became a teaching assistant for the Ancient World History course, and also gave lectures for the School of Diplomacy. “Throughout my teaching experience I often face Russian propaganda narratives,” she says, so she focuses on combating disinformation.** “Russia has always been successful in discrediting the ideal of democracy, a narrative that has been very successful, especially in the era of populism, election meddling, and lack of unity in the democratic societies,” she says. “I see my country as a center of the clash.”

Winning scholarships for summer study abroad widened Elene’s world experience: the Estonian Ministry of Foreign Affairs Development Cooperation Scholarship for the program “EU-Russian Relations and Baltic Regional Security” at the University of Tartu; and the Latvian Government Scholarship for a program on sustainable tourism at Turiba University in Riga.

Volunteering as a Youth Worker provided one of Elene’s most rewarding endeavors. The NGO had received funding from the EU to organize a community festival in Udabno, a rural village near the Azerbaijan border of Georgia, to develop the community and empower youngsters to participate in their society. (Udabno is Georgian for desert.) “My team faced many difficulties caused by the skeptical attitudes of the regional municipality and the conservative community in the village,” Elene says. “But diversity and colorful ideas led to creativity, and we managed to organize a local festival and opened a library in the village.” Though lacking future funding, locals hoped to reestablish the tradition of village festivals. “The festival brought governmental, non-governmental, local, and international interests together,” cooperating for success. “Follow-up research revealed that the project had a significant impact, especially on youngsters.”

While an intern at Transparency International of Georgia, a global organization leading the fight against civil corruption, Elene was selected as a Young European Ambassador of Georgia, (YEA).  “Becoming a member of the international cooperation committed to peace-building is fascinating for me,” Elene says. “Being a representative of Georgia, I see international support as a key aspect of democratization.”

The world seems to forget Russia’s invasion and occupation of Georgia, a small state, so Georgian foreign policy connects Georgia’s struggle along with Ukraine’s whenever internationally addressing Russian occupation. Georgia faces an ongoing borderization threat, which means that the Russian occupation “border” constantly favors Russia’s ongoing land-grab. Georgia wants to remind the international community that it is “a developing democracy, which pays the price of freedom on a daily basis,” Elene says.

As an English teacher in the American Institute of Tunis in Tunisia, Elene promoted UN SDGs as a means of democratization for fragile democratic systems. Currently, she’s at the Embassy of Iraq in Tbilisi, Georgia, serving a translator/ interpreter (Arabic/English/Georgian) and helping the consulate in the legal integration process of Iraqi refugees into the Georgian society.

“Few would deny that changing something is always complicated. It’s easier to stay in your comfort zone and be just ‘realistic.’ However,” she says, smiling, “I am not afraid to aim high and to consider changing my world as the main goal. And, yes, I am being realistic.”

** Here are some examples of the misinformation campaign Elene helps students identify. Some are exclusive to Georgian society and some are universally used in various countries: