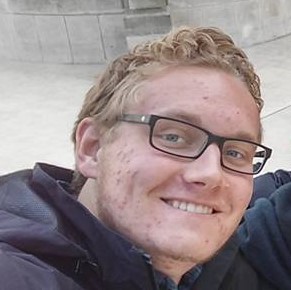 Undoing the wages of war to see peace prevail

At the age of thirteen, Brevin Anderson moved with his family from their home state of Washington to Uganda in East Africa where his parents worked at a children’s center. “It is impossible to overstate how this experience shaped my life,” Brevin says.

During his stay in a rural village, he absorbed the ideal of community and the value of finding common ground.  “Living side by side with someone, learning their language, respecting their culture, and eating their food creates a connection on a simple, yet powerful, level,” he says. He also worked for an NGO in the capital city of Kampala, serving a small community with housing and medical care. “The field of aid work is transient and ever-changing,” according to Brevin. He’d get to know someone quickly before one of them had to move on. He still keeps in contact even though he may never see them again. “Those I consider my close friends are all over the world.” Brevin worries about many of them though.

As a teenager, he remembered the contentious elections of democracy in action in the US, but Ugandan “democracy” is another matter entirely.  During election campaigns there, he says, “protestors are shot at in the streets, incumbent parliament members keep their seats under suspicious circumstances, the head of the opposition party is arrested, and the government attempts to cut off social media and other communications.” Thirty years earlier, President Museveni had forced the murderous tyrant Idi Amin from power, but Museveni’s long-entrenched government has allowed corruption and repression.

In a personal narrative, Brevin describes watching Museveni descend in a massive military helicopter onto a football field, protected by guards “weighed with lines of ammo, Kevlar, and AK-47s.” Among the onrushing hordes, “adrenaline-filled children, bowled forward on bare feet made impermeable by years of stomping earth in gardens and walking the rock paths in the bush.” Fortunately, no one suffered violence, but throughout Museveni’s most recent campaign, Brevin hadn’t heard from certain people because communication had been blocked.  The fact that the international community doesn’t address the situation in Uganda disturbs him greatly.

After returning to the US, Brevin was also disturbed by the polarization and lack of civility in the electoral process. He’d earned a full scholarship to Seattle Pacific University and, with his concern for global issues and his talent for writing, he chose a double major in International affairs and English. “Learning the basic theories of international affairs has painted the world in the colors of constant struggle,” Brevin says, “people against people, nation against nation, ideology against ideology. War seems a constant and unending threat to all. By war’s very nature, it tears down what peace and cooperation attempts to build.”

Brevin’s interest in trying to change things led him to become a senator for Arnett Hall at Seattle Pacific University, helping the senate to become “a responsive, deeply involved body.” The engagement, the opportunities, and “acting as the mouthpiece” of his fellows have proven both exhilarating and rewarding. He’s also devoted sixteen hours a month to collegiate debate and has worked as a debate coach at a debate camp for two summers. Additionally, Stoa USA Speech and Debate League named him National Speech Champion in a broadcasting event.

Another form of leadership taught Brevin the immediate necessity of keeping a level head, speaking assertively, using crowd management techniques, and problem-solving skills when, as a younger referee, he had to threaten to eject players in an adult sports league for being drunk and rowdy. Brevin found that fun. Also active in sports, he doesn’t rule out a career with more action than the halls of diplomacy would provide. He signed up for the SPU Mentor program and met regularly with an FBI Senior Intelligence Analyst in order to learn about the FBI and the State Department where the man had also worked. Over coffee at a cafe, they chatted about career paths along with topics like domestic politics, globalization, and Russian literature.

Literature, stories, writing—Brevin’s other love. He is a young man with many stories to tell, whether they involve political and military intrigue or meeting a simple carpet merchant in Kampala. “You cannot hate someone once you know their story,” he says. “My role is to share these stories, collect stories, and be a story for others to see.”

With so many possibilities, Brevin is still most drawn to Africa. “Tribal issues, poverty, disease, and armed conflict hold the region back from growth,” Brevin says. “It is something that I think I can make a difference in,” perhaps through the US Foreign Service, the UN, World Bank, an NGO, or even international business. The disasters of armed conflict “can only be undone by people who believe in peace and who will toil to see it prevail. This is a work worth dedicating one’s life to, and it is a fight I wish to continue fighting.”