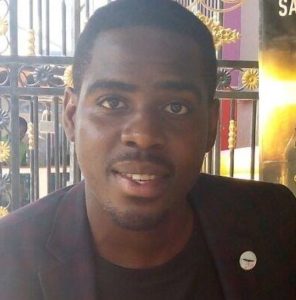 Beside the tallest mountain in West Africa lies the city of Buea in Cameroon. Bertrand Momo attended the Catholic University Institute of Buea (CUIB), pursuing a degree in business management. One Friday afternoon in 2011, a campus priest summoned Bertrand to his office. The priest may have known that Bertrand had been Head Pupil during his elementary education and a leader ever since. He probably knew that Bertrand’s recent examinations led the General Certificate of Education (GCE) Board to name him Best Student in the Republic of Cameroon.

The priest said, “I had a vision, Bertrand, and I saw you, in front of a multitude of people who were screaming and shouting. You were some sort of leader or peacemaker. As you spoke words of wisdom to them, everybody calmed down. I believe you have a great destiny, one of peacemaking.”

A Catholic Christian, Bertrand believes that some people are ordained to bring peace to the earth and that he shares this path. “I have always found it so interesting to interact with Baha’is, Jews, Moslems, and even people who still practice traditional religions in Cameroon,” he says. “We may not always have the same perspective on life, but we always found a way to solve our problems in a pacific way.”

He read sermons in church over the next two years and extended his entrepreneurial spirit into public service, beginning a two-year stint training other young people for JCI, a globally-minded NGO committed to improving communities. He also founded his ongoing www.MomoB.biz, “offering spectacular marketing to ambitious organizations.” Subsequently, Bertrand founded and became president of the ongoing Africa Progress Alliance Association, dedicated to community development, such as fundraising for orphan’s education in Buea. Later, he would become the campaign manager for the Africa Progress Alliance, helping to sensitize people concerning Hepatitis B in Buea.

While the area around Buea was relatively safe from Boko Haram attacks, northern Cameroon suffered new aggression in 2014. Over a two-year period, Boko Haram perpetrated four hundred attacks during their incursions into Cameroon from Nigeria, including fifty suicide bombings, killing at least 1,350 civilians, ninety-two security forces, and injuring many, according to International Crisis Group. Bertrand’s attention turned toward peacemaking, and in June, MasterPeace Egypt included him in the Top Ten Writers for Peace Worldwide.

He also earned a Best Public Speaker Award from a regional Center for Entrepreneurship and Innovation, and a Best Scholar Award from CUIB. During the summer of 2014, he worked full time for Citibank Cameroon as a human resource assistant.

That same year, Bertrand’s phone rang in the middle of the night. His new friend Mohammed called him from the northern region. Bertrand says that Mohammed shouted in a terrified voice, “They killed him, Bertrand, they killed him!” According to Bertrand, his friend “had just found his father’s body with his throat slit open in the middle of the street in Maroua.” Boko Haram had kidnapped the father two days earlier, demanding a $50,000 ransom, which the family couldn’t pay, and the son was inconsolable over his father’s death.

Bertrand believes that over two million people have been affected by this deadly conflict. He stresses that he isn’t in danger now, but that could change with the publication of a book he’s working on. “What kind of courage can move a human being to tie a bomb around his belly, enter a crowded market square, and detonate the explosives to kill a hundred people? The Prophet Mohammed and Jesus Christ both taught mutual love: Why is it that their followers are killing each other all around the globe in the name of Mohammed and Jesus?”

The mentality that tries to establish peace through war saddens Bertrand. “Instead of killing terrorists, why don’t we prevent people from becoming terrorists in the first place?” he asks. Continuing his volunteering and his startup ventures, he envisioned training people to become entrepreneurs instead of suicide bombers. He launched or co-launched at least ten entrepreneurial initiatives before his twenty-first birthday, “most of which,” he says, “had an early death but whose lessons still live today.”

In August, 2014, he went to Nairobi, Kenya for a conference held by Agribiz4Africa. They named Bertrand one of the “Top 25 Entrepreneurs in Africa.” One of his ventures involves WasaFridge, a unique construction of earthen vessels, cooling food without electricity and preventing spoilage despite Cameroon’s equatorial heat. (Marketing for the project was developed during HSI, and WasaFridge received seed-funding.) Bertrand also won Best Entrepreneur Award from his university.

At CUIB, Bertrand was elected Student President to work with 1500 students from 285 tribes and eighteen nationalities, developing the ability to let people cooperate together despite their cultural differences. “I realized that beyond long-term ideals, a leader has to deal with change and unforeseen contingencies: a strike amongst football players, an accident involving students, a week-long electricity crisis, an issue of rape on campus, and very short-notice visit of a top government official.” Solving problems while focusing on the future goals proved to be the most vital aspect his leadership.

Bertrand has realized that long-term goals require educational foundations. “I aspire to become an expert in education for peace, to forge a career in pedagogy,” he says. “Our educational system has forgotten to teach people how to live, how to love, how to be happy, and how to make other people happy.” He envisions an “Nseku methodology” that offers courses on peace, sustainable development, and entrepreneurship. Nseku means school in Cameroon’s Bamileke language and aims to complement traditional education, rather than replace it. “Fulfilling Nseku is my life dream,” Bertrand says.

He continues to work forty hours a week for Go Ahead Africa as a business leadership consultant, at the same time co-founding Gojamaa.com, an African social network to connect students and professionals.