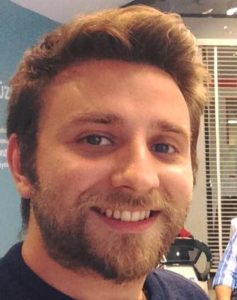 “My name, Berat, means liberation,” says Berat Kjamili, HSI’s first student from the Republic of Macedonia. Of Turkish origin, his sense of freedom is a major focus in this multi-ethnic country that also includes Albanians, Turks, and Greeks. He explains how, after Macedonia’s independence, war and political conflicts undercut minorities’ rights, and Macedonian ethnic groups isolated themselves, creating lack of understanding and entrenched conflict. This extends, unfortunately, he says, to the censorship of journalists, even prison terms—which doesn’t sit well with his innate passion for freedom.

In ancient times, a leader from Macedonia changed the world, Berat points out—Alexander the Great; and in Skopje, the capital, the humble birthplace of a nun has been memorialized, honoring a humanitarian and Nobel Laureate, Mother Teresa. These iconic leaders from his homeland inspire Berat, one for his grand vision and the other for her spirit of peace. “Perhaps it is my time to influence my community too,” he says. Berat says the issues of gender inequality and LGBT (Lesbian, Gay, Bisexual, Transsexual) people remain problematic. He hopes to influence awareness of minorities and their freedom of speech within the community.

In his high school years in Gostivar, his home town in northwestern Macedonia, Berat received an acknowledgement from the United Nations Development Program (UNDE) through the European Link Center in Macedonia for his contributions. UNDE supports restructuring to build an inclusive society and involves developing human and institutional solutions through education and partnership. Berat also participated at the American Corner in Tetovo—a nearby city—that is supported by the American Embassy, offering programs to develop teamwork skills.

Additionally, Berat volunteered as a Regional Red Cross Youth Committee Coordinator. His team organized programs to raise awareness among young people that nations can interact peacefully and live together. He organized a Red Cross in Action – Promotion of Human Values (RCA-PHV) on International Women’s Day, a nursing home event. Berat’s report on his experience was published in Voices Magazine in Macedonia and earned acknowledgement in Moments Magazine in Kuwait. In further efforts to promote unity, Berat helped host a community celebration, the Ninth of May Europe Day, acknowledging the European Union.

The highly rated Middle East Technical University (METU) accepted Berat in the spring of 2012 to study economics, which would require a costly move to Ankara, Turkey without a scholarship. If he were willing to major in a different field at another good university, Turkish Scholarships would award him his expenses. Berat decided to take the financial risk and attend METU. Then, just in time, a scholarship was awarded to him because of his academic performance and many activities.

In the spring term of his first year, the rector’s council of the international students’ office contacted Berat about launching such an organization and asking whether he’d be willing to serve as its president. “The problem was that as much as 70% of the international students were from Middle-Eastern countries,” Berat says, but he was one of only ten students from Macedonia—Europeans. Consequently, a meeting was held for all international students, several vying for control. “We collaborated with all nations,” Berat says, “Middle Eastern students and Europeans, so that the board of directors would include every nation.” He and his team won, and Berat was elected president of the METU International Student Association (MISA), an organization insuring the rights and recognition of foreign-born students.

To help integrate his new constituents, Berat and the board organized all its events in English and acquired sponsors. The following fall, MISA addressed more issues. Foreign students had previously queued up as early as 2:00 AM to apply for resident permits, but MISA established reservations via internet. Berat says that leading the board of directors by sustainably dealing with people from different countries was like learning to conduct an orchestra. The ambitious new organization held the first International Student Congress in Turkey, in March of 2014, an idea that spread to other universities, a first step in international cooperation.

The following December, MISA hosted the official Human Rights Anniversary, offering a panel on Gender Inequality in partnership with the United Nations and promoting international cooperation and enhancement of multilateral responses to such global problems as conflict, humanitarian crises, and recovery. Berat’s role aims to support gender equality, rights of LGBT people, and freedom of speech.

The magazine for IFORS (International Federation of Operational Research Societies), EURO, and OR News – Tagungen published articles expressing appreciation for the event and other of Berat’s activities. In September 2015, Berat was nominated for the Turkish Entrepreneurship Foundation, qualifying in the top 140 out of 30,000 applicants.

By June, 2016, Endeavor Turkey – Case Campus (School of Entrepreneurship Education) selected Berat and 117 fellows out of 1000 university students for a funded position. The program consisted of online entrepreneurship coursework and three conferences in Istanbul led by famous business people, included the most famous entrepreneurs in Turkey.

“Solving my problems neither with the help of my family, nor of my home community helped me become stronger,” Berat says. “And leadership means creating my own freedom.”