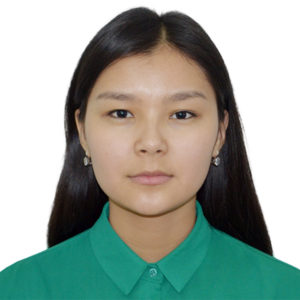 The Talas Valley lies between two mountain ranges and claims the smallest oblate (province) in Kyrgyzstan, yet, that’s where the country’s “last bloody revolution began right before my eyes,” says Begimai Marlenova. In early April of 2010, the fourteen-year-old was earning high marks in school and living in a middle class family. In the countryside, local herdsmen filed along roadways with droves of horses, sheep, cattle, goats, and donkeys toward their jailoo, the spring pastures watered by the snowmelt tributaries to the Talas River. The outlying calm hid combustible discontent in the city of Talas, however. Government corruption inflicted by the current president and his family had deterred growth, created unemployed youth, and forced parents abroad to seek jobs.

Begimai’s mother held a good job at the time, and her grandfather had served as the regional director of medical facilities. “He had a keen understanding about the needs of ordinary people with low or medium levels of income,” which led to the national implementation of free dental care for pregnant women, children, and disabled people. His ideas about helping people greatly influenced Begimai.

Without warning, Russia imposed duties on its energy exports to Kyrgyzstan, sending fuel, transport prices, and living expenses skyrocketing—especially for a remote area like Talas. On April 6th, a thousand protesters stormed a government building in Talas, and by the next day, rioting also broke out in Bishkek, the capital. In the south, ethnic tensions added to the volatility, and the city of Osh and its surroundings also erupted in violence. Armed police clashed with protesters who threw rocks and carried clubs. Government snipers fired into crowds, but in an astonishingly short time, the corrupt president was forced to resign. Roza Otunbayeva became the interim president, the first woman in the country to hold that honor. She quoted the words of the Koran and urged forgiveness and peaceful coexistence. The UN reported that between 400 and 1,000 people had been killed, and as many as 300,000 people were displaced.

Begimai reveals that the exiled president had absconded with eighty percent of the budget assets by transferring funds to offshore financial institutions, leaving a staggering deficit. Belarus took him in and still refuses to cooperate with extradition proceedings. “Even now,” Begimai says, “we owe to other countries more than sixty percent of our GDP, which may lead to the default of the country. My mother, an only parent, lost her job and migrated to Russia in order to give me and my sister quality educations and a better future.” Begimai believes that the main problem in Kyrgyzstan “is a conflict between ordinary people and the government. Even now there is no justice toward its citizens.” Like her grandfather, she aims to help bring about change.

Though she attended a public school in Talas, she distinguished herself by winning the regional Olympiad on English Language and Literature from the Ministry of Education. She also joined an organization to which she remains devoted, Agents of Change, an NGO that often partners with the UN in various campaigns such as empowering young women.

Eager to explore the financial system of developed countries and enabled by her mother’s financial assistance, Begimai applied at the American University of Central Asia in Bishkek to the Business Administration program with a concentration in Economics and Finance. Kyrgyzstan had become independent after the collapse of the USSR in 1991, and, as in other post-Soviet states, little effort was made toward transitioning from a planned to a market economy. With low levels of education, citizens lacked basic knowledge of banking and financial institutions. “I have a huge desire to be the one who will work for the sake of people and who will develop economy of Kyrgyzstan,” Begimai says.

It didn’t take her long to start making the kind of changes she hoped to realize. With the help of volunteers from Agents of Change and the Rotaract International Charity Club, she launched her program to train high school students in financial literacy. The main concept of the project addresses budgeting, investing in education, and opening businesses “to become the next leaders of Kyrgyzstan.” Beginning with her home town of Talas, the project spread to ten high schools and continued in Bishkek, training hundreds of university students. In the process, Begimai developed a basic curriculum presentation that attracted grant money. In January, 2016 the Rotaract International Charity Club honored her for her accomplishments.

During that same time period, she made the deans’ lists. The following summer, she served an internship with the Ministry of Economy of the Kyrgyz Republic in the Investment Development Agency and helped organize an International Investment Forum. Begimai continued working, first as a volunteer at the Department of Tourism, and then at the Writing and Academic Resource Center as a financial accounting and economics tutor. She ended the year with a scholarship for outstanding academic and social achievements from Institute of Eurasian Research.

The following year, Begimai made the Presidents List at her university, earned the Spark of Hope Scholarship, and served as an intern with an international financial advisory firm, Deloitte & Touche, LLC—which had awarded her a prize the previous year for her economic and financial sector knowledge. She graduated in June, as valedictorian of the class of 2018 and was awarded a scholarship from the European Commission to pursue her master’s degree in Public Sector Innovation and EGovernance the following September in Europe.

Begimai eventually hopes to work at the Kyrgyz Ministry of Economy in the department of Investment Development and Strategic Planning. With regional cooperation, Central Asia has the potential to become the trade crossroads of two continents, owing to its strategic location. Influenced by aspects of the American economy, Begimai would represent Kyrgyzstan as an “eco-country” and improve the UN Silk Road program to drive collaborative, sustainable tourism. “I dream of making my country a place with the best investment conditions, where international corporations as well as individuals can open their companies and know that their capital will be safe—the Kyrgyz miracle.”