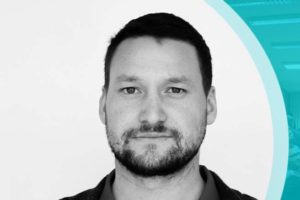 Finding the leader inside

In northwestern Bosnia and Herzegovina, the city of Tuzla was home to Bosnians, Serbs, Croatians, and Jews, offering Avdo Halilovic one of the most multicultural environments in the country—despite the war over Bosnian independence. “Churches, mosques, and synagogues, are in a radius of a hundred meters, all respected equally, standing side by side,” Avdo says. Tuzla didn’t escape violence, however. He arrived on the planet on a tragic day when a shell hit the city, causing a massive explosion that resulted in many fatalities, extensive injuries, and destruction. Yet Avdo is a uniquely positive and visionary young man. As a teen he played drums and piano and sang, soon leading a band. He also loves folk dancing, which took him to summer festivals in Sweden and Turkey. At the same time, he watched others of his generation “migrate all over the world in search of a better life, not because they are not good enough, not because they are not educated, but because nobody here in Bosnia understands and supports them,” he says.

Avdo also played handball on a professional team for several years, but its morale deteriorated. The country has endured two decades of stagnation and depression since the war. “Smart people work for $170.00 per month, magicians feeding two children on that small amount,” he says. Avdo gave his teammates his all, hoping to inspire them to fight for success. Instead, they laughed at him. Acutely frustrated, Avdo suffered a health crisis that nearly resulted in his death.

Upon recovery, he knew he’d never again work with people who didn’t respect and appreciate his contribution, and his optimism only grew stronger. He held a passionate desire, as he puts it, “to motivate young people to do great things, make great things, to stay in their own country, work together, and build a place where our future generations will enjoy a good life, fresh air, clean cold water from rivers full of fish, green forests where birds will sing their happy song every day, and animals will dance.”

He took a job with a company that quarried dimension stone (processed to specific dimensions), leaving after two years as an executive, and in 2011 enrolled in the School of Economics and Business at the University of Sarajevo (SEBUS) where he would attain his BA in Business Administration and Management. While there, he worked as the project manager and then did internal audits at the Career Center as well as attending American University in Bosnia and Herzegovina (AUBH), studying international finance. Despite the crowded schedule, his busiest years lay ahead of him.

“You do not realize that you are an inventor,” Aldo says, “it is a process where you observe things and define problems, and then you try to solve them.” What he observed was what others tuned out—people using public transport, resting their heads against the seats without considering whether the seat harbored viral disease, bacteria, fungi, or lice. He learned that more than six billion people worldwide use public transportation. So, he invented disposable hygiene headrest covers for buses, planes, trains, or even the cinema, then applied for and received a patent.

When SEBUS held the Youth Employment Project in May of 2013, Aldo won first place in the “Startup Challenge” for the best business plan, the first of many awards. Two months later came another first place for his plan from USAID and GEA. That summer he joined the Inventors Association of B/H and the International Federation of Inventors Association. In August, he began and continues business consulting for startups, organizing more than fifty workshops and activities for student groups, in addition to focus groups within NGOs and governmental organizations about SME (small to medium enterprise), social entrepreneurship, self-employment, and leadership.

Then in September, Avdo went to Manchester for the Entrepreneurs Festival organized by UK Trade and Investment, and won second place for Best Startup. “I had a chance to start my business in the United Kingdom (also Slovenia and Switzerland), but my goal is to make a home country brand and corporation that will serve as an example.” Avdo wants to show young people that it is as possible to be as successful in Bosnia as anywhere in the world “if you are willing to work hard, give up of long hours of sleep, push harder after the first NO, and to never forget why you are doing your project.” Even if, like Aldo, “you have no political or any other connections, nothing but will, it is possible to reach the top!”

The day he returned from England, he declared himself Chief Executive Officer and owner of Kimbly producing disposable hygiene products, all while working toward three different university graduate degrees and a master’s degree. He continued his commitment to youth by organizing leadership camps and camps promoting sports over drug use. “You need to find the leader inside you,” he tells them, “to lead yourself first properly, then the others will join you.” Avdo also became a board member at Youth Bank through the Mozaik foundation, evaluating projects for local community improvement groups.

After a year of a solid working relationship with his employees, Kimbly brought in $2.5 million dollars worth of contracts. Avdo’s invention won more awards in Kuwait, Poland, Paris, South Korea, Croatia, China, and from the Inventers Association of Serbia. The Polish award of June, 2015 included co-financing by the European Union as part of the Malopolska Regional Operational Program. Soon, Kimply was also producing patented medical equipment which helps patients with catheters, draining or infusion, allowing them to walk normally with both hands free.

“Creating new jobs and funds for people to have normal life is how I see my role in making a more peaceful world,” Avdo says.