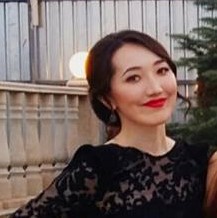 A future Minister of Economy in Kyrgyzstan

Renamed Bishkek after the collapse of the Soviet Union, the capital of independent Kyrgyzstan originally rose alongside ruins of an ancient caravan stop along one of the Silk Roads that ran north of the vast Kyrgyz Tian Shan Mountains. The economy of Kyrgyzstan also collapsed during that time. “Enterprises shut down, people lost jobs, and the critical economic situation gave root to serious consequences that are still present in our days as corruption, a great outflow of migrants, and a low level of education,” says Aidai Kadyrova of her beloved country. In the resulting power vacuum, “Kyrgyzstan was unlucky to have state leaders who didn’t prioritize the needs of the country and its citizens,” Aidai continues, pushing people into “two painful revolutions, accompanied by ethnic collisions.”

Aidai was a child of eleven during what came to be called the Tulip Revolution, and her father and cousin worked as policemen, hoping to ensure stability. The duty of guarding the White House—home to the president and government offices—fell to her cousin’s police unit. Tens of thousands of protesters surrounded it in March of 2005, leading to violent confrontations.  Rebels threw stones at the police, fatally injuring her cousin’s friend. “He passed away while my cousin was holding him,” she says. Her cousin quit the force, but her father, had to support the family and continued working day and night. “Massive marauding took place everywhere in Bishkek. All the supermarkets and shopping centers were robbed, and I was a witness of these terrible scenes.” She decided that “something like that shall never happen again.”

“It is poverty and low education that push people to commit crimes,” Aidai says, “and to be easily affected and manipulated by radical forces.” A faction of Uzbeks within Kyrgyzstan fomented ethnic unrest resulting in a second revolution in 2010, her country’s darkest moment. On the verge of inviting Russian military intervention, Kyrgyzstan’s first woman president managed to reestablish peace, deeply inspiring Aidai. “Women deserve to be heard, they deserve to be respected, and they deserve to be followed,” she says.

Today, however, many Kyrgyz young people are turning to ISIS ideas and joining the war in Syria. Add to this the problem of brain drain. “Most of the people going abroad never return,” she says, “perpetuating the economic stagnation. People are the most valuable assets in any community.”

Honored with a certificate from the Mayor of Bishkek, Aidai entered the American University of Central Asia in 2012, one of the best universities in Kyrgyzstan. She was fortunate enough to have the Chairman of the National Bank of Kyrgyzstan as one of her professors. “I obtained valuable knowledge in the area I want to devote my life to – economic development,” she says. A true turning point came when she attended Linton Global College of Hannam University in Daejeon, South Korea during the spring semester of 2014. She met many “intelligent, progressive and inspiring people who shared their knowledge and vision,” stressing international cooperation and conflict resolution. Upon her return, she joined the Enactus team at her university, which she describes as “a global community of dedicated students, academics, and business leaders who use the power of entrepreneurial action to transform lives and shape a more sustainable world.”

Through Enactus, Aidai participated in “Manas Trail,” a social entrepreneurship project. Tourism has dropped in Kyrgyzstan despite natural wonders like Issyk-Kul Lake, the second largest alpine lake in the world. While the north of the lakefront is well-developed with entertainment centers, the agrarian towns to the south don’t enjoy tourism profits. Aidai’s team chose a little-known village of artisans and craftsmen and organized tours that showcased their output while guests enjoyed the atmosphere of true Kyrgyz life. Through coordinating guides and transportation, active promotion, and marketing tasks, Aidai led her team to partner with hotels and restaurants, a local tourism association, and in training villagers on hospitality, and much more. “We helped 14 families earn a modest income on the initial venture.” Aidai was chosen as a Vice-President of the team.

Aidai also participated in the Model UN club and enjoyed a summer cultural exchange in Strasbourg, France in 2015. Perhaps most importantly, she worked in an internship for the Ministry of Economy of the Kyrgyz Republic in an investment promotion agency, allowing her to understand the organization from inside and gain valuable knowledge of current conditions and trends. She volunteered in a “Household Survey Conference” on promoting research and evidence-based policy making.

Inspired by the stunning fifty-year development of Singapore, Aidai has no doubt that though Kyrgyzstan remains one of the poorest Post-Soviet countries, it can overcome its economic instability to become a prosperous nation. “My highest aspiration is to become a Minister of Economy of the Kyrgyz Republic, a state official who exercises control over elaboration of main policies: strengthening the state through sustainable growth and improving living standards.” Kyrgyzstan must achieve its full potential in mining, logistics, and transportation, she says. “Corruption in strategic industries resulted in the absence of trust to the government,” she says and aims to change that too. “While adopting new regulations, it is essential to deeply research both the short and long-term consequences to project the possible outcomes. This is what research and evidence-based policymaking promotes.” The bottom line for Aidai is that the sad realities of life in Kyrgyzstan “make me understand that my country needs me.”