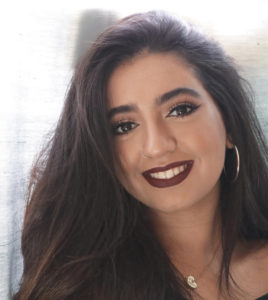 Today, Ftoon Al Thaedi is a young pioneer, but at age thirteen, she suffered the loss of a brother, leaving her with a grief so profound she felt helpless and purposeless. “I completely shut off,” she says, “but at some point I got extremely tired of feeling that way.” She needed a new direction in her life, but options were limited. “We grew up in a society where women are constantly being told no,” Ftoon says. She began to explore ways to release her sorrow through self-expression, especially art. Inside her home she experienced encouragement.

Due to the high percentage of millennials, long-held traditions are being challenged. Ftoon points out that Saudi Arabian communities are actually quite diverse, particularly as they cope with changing times.

The more Ftoon painted, the more she became passionate about it, and the more her joy in living returned. Artistic expression gave her the ability to convert feelings into visuals that connected her to others, instead of isolating herself. “I let go of the grief that was holding me back,” she says, “but at the beginning of my art journey, I had no hope for art as a career choice.”

Thanks to the internet, “young Saudi women have done tremendous work despite the limitations,” Ftoon explains, crediting the ways the internet and other media has revealed women everywhere pushing limitations, growing, and empowering themselves. Ftoon also feels especially fortunate and grateful to her mother for encouraging her to be herself and stand on the side of women’s rights. To mature as an artist, she knew she’d have to take baby steps on a path she would forge to a large extent on her own. Fortunately, education would help.

In 2015, Ftoon enrolled in the ultra modern Princess Nora Bint Abdulrahman University in Riyadh, the largest women’s university in the world. Not surprisingly, its college of art and design is the newest college, and Ftoon must have been excited to see its displays of representational art. In January of her second semester at PNU, she worked as an art mentor for a company called Rasmah. Energetic and productive, she saw the job as a chance to spread knowledge about art. She developed workshop plans, art events, and art camps for kids and adults, highlighting different art movements and styles as well as history.

At the spring art camp, total responsibility shifted to Ftoon. She practiced management, recruited volunteers, provided inspiration, and gained confidence. “I became a leader without realizing it,” she said. “I saw a completely different side of myself” and realized that she needed to keep on being a leader in order to help bring art into mainstream Saudi culture. Her dream expanded, and Ftoon “came out of this experience motivated to start on my own” because the pressure of responsibility had pushed her to do what she’d believed to be impossible.

Another transformational event happened a year later when Ftoon received a Middle Eastern Partnership Initiative (MEPI) Grant for a six-week summer exchange program offered by the US State Department. She was assigned Montana State University for the program, which focused on leadership and team-building.

During her first few days among students and young people from the Middle East and North Africa, Ftoon encountered the many stereotypical perceptions of what a Saudi woman is like. “We are perceived as weak, unaccomplished, less smart, controlled, without personality, and unaware,” she says, blaming the media, in part, for perpetuating stereotypes. “Saudi women would prefer not to be exposed” because of the way Saudi society functions, she says, so the media stresses the negative side, but, “There are so many powerful women.”

Ftoon stood before the group as a young ambitious Saudi woman and shared her stories about losing her brother, having a little brother with disabilities, feeling like a misfit in her community, and her passion for women’s rights. “I showed them my art work, which helped them see the stories and not just hear them.” The group shared stories and exchange perspectives, leading to a profound sense of connection. Ftoon discovered that nourishing discussions led to conflict resolution and peaceful agreements. “The more I developed networks with individuals outside my country, the more I acknowledged the significance of resolving conflicts.”

Shortly upon her return from Montana, Ftoon attended another international event, representing PNU as an Honorable Delegate for UN Women at the Model United Nations held at Alfaisal University in Riyadh.

The following January, Ftoon and her artwork were featured on AlThaedi, Saudi national TV. She spoke about her experiences as an artist and her life. Montana State University featured her, her story, and her work on its website.

She’s currently working on “an art initiative that aims to create an open space for artistic individuals to freely express themselves without judgment or exclusion” and will be gender inclusive. Her country is making progress in the arts, as evidenced by the expansion of the MiSK Art Institute which has included new galleries and other resources Ftoon supports. “My true potential is in combining art, cultural exchange, and social change. I constantly look for ways in which I can diffuse the conflict within the Saudi Arabian community while it goes through this massive change, so that we can avoid any consequences that may potentially cause harm.”

Just by being herself, Ftoon is breaking stereotypes. She uses art as a tool to connect with individuals from different cultures and influence change in her community. “I believe in the power of conversations and visuals to address issues, provoke, and inspire.” Her stylized self-portrait behind the wheel of a car captures her drive toward liberation. Her mixed media piece portraying her Down syndrome brother instantly accesses her joy at the gift of his presence in her life. The reason art is worth defending is that it nourishes our humanity.